We’re hyped to be welcoming one of our all-time favourite Merseyside acts to our stage, for an exclusive residency of two one-off shows. Garage rock legends The Stairs, whose attitude and style launched a thousand Liverpool bands, are returning to the stage after a five-year hiatus. And we’re overjoyed to have them here at Future Yard for two very special pre-Christmas shindigs, their first live shows in almost five years.

IMPORTANT INFORMATION: Unfortunately these shows have been rescheduled from, their original December dates due to illness. The shows will now take place on 10th and 11th March 2023. All ticket holders will receive an email from their point of purchase regarding details about this change. Ourselves and the band are really gutted about having to change these dates, and we don’t do so lightly. We apologise for any inconvenience caused, and we’re sure you appreciate that this is done with the best intentions for all involved.

The original trio (Edgar Jones, Paul Maguire and Ged Lynn) released the record Mexican R’n’B in 1992 via Go! Discs, which would soon achieve cult status. The LP lays claim to being one of, if not, the most sought after, great lost album of the early 90s; recorded by a 60s-influenced garage, West Coast, fuzz guitar Liverpool juggernaut trio. Its bluesy growl and cosmic r’n’b swagger can be seen in the same lineage of great Merseyside acts as The La’s, The Coral and The Zutons. But The Stairs’ legendary standing isn’t restricted to the great canon of Liverpool bands, but also as sits as an essential – if occasionally under appreciated – part of British underground rock.

All aboard The Weed Bus! 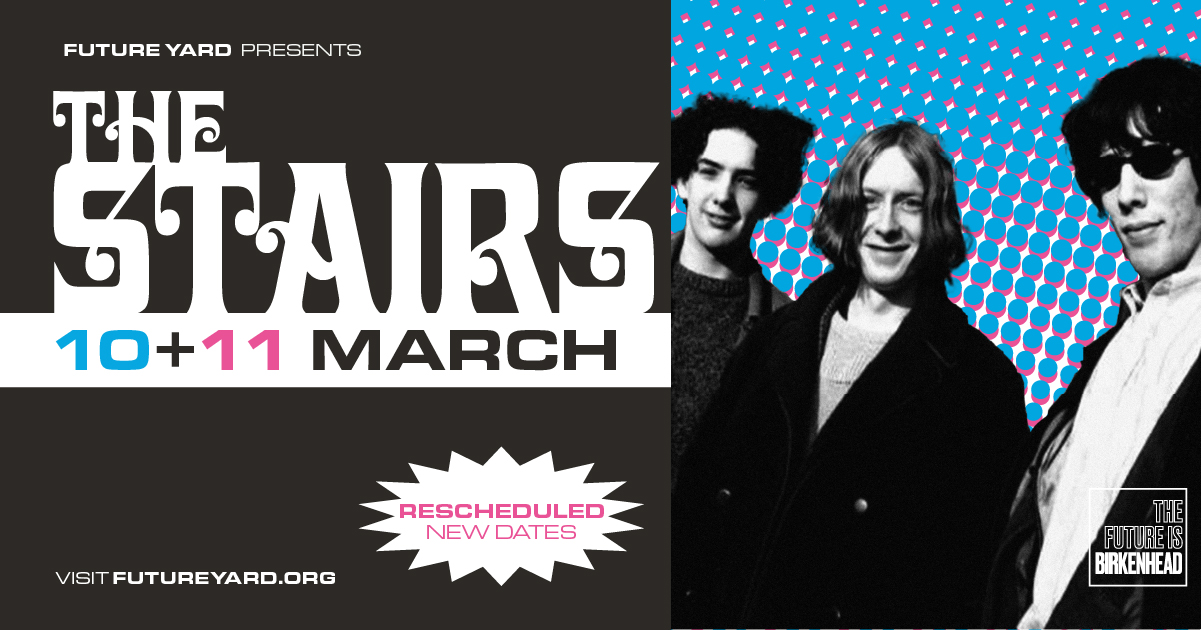 The Stairs were truly one of the great lost bands of the early 90s. Formed in 1990 in Liverpool by singer and bassist Edgar ‘Summertyme’ Jones, guitarist Ged Lynn and drummer Paul Maguire, The Stairs quickly attracted a huge cult following with their classic fusion of mid-1960s US garage rock and British r’n’b. Championed by Elvis Costello, Paul Weller and many other luminaries, they influenced (along with The La’s), a whole new generation of musicians (including The Coral, The Stands and The Zutons). The Scouse trio created a heady mixture of psychedelia, Motown, garage rock ‘n’ soul and r‘n’b, creating something all their own, topped by the astounding growling blues vocals of Edgar Summertyme.

They released little, apart from the unforgettable cult classic Weed Bus EP and their celebrated, psyched up debut LP Mexican R’n’B (all on Go! Discs), before splitting up in 1993. But what they did release was enough to cause a storm with local audiences, and lit a fire that burns to this day.

Released in 1992, Mexican R’n’B is a triumph of the soul, showing British psychedelia at its finest. The group’s abandoned second album was never released and lay lost, with various demos scattered across cutting rooms floors (and in various relatives’ attics!). Storied Liverpool archivists The Viper Label collated various singles, demos and lost Stairs hits on two subsequent releases (Right In The Back Of Your Mind, 2006, and The Great Lemonade Machine In The Sky, 2015) that hinted at what might have been. The collection of dirty, gritty, raw and passionate hits across these collections span the whole spectrum of The Stairs’ existence, and further bolsters their legendary reputation.

It’s only now, almost three decades after they disbanded, that The Stairs have become as legendary as the bands they so admired. Which is why they deserve a proper celebration.

Edgar Jones subsequently carved a niche in making albums that continued to evoke the best of music’s past while also remaining contemporary, attracting many heavy fans and admirers (Noel Gallagher and Paul Weller among them – Edgar played in Weller’s band for a while). Jones’ seminal 2005 album Soothing Music For Stray Cats is a timeless classic. Edgar went on to work with Paul Weller, Saint Etienne, Johnny Marr, Cherry Ghost and Candie Payne, among others, and formed the bands The Isrites, The Big Kids and Free Peace/Edgar Jones’ Free Peach Thing. Edgar has released several solo albums, and still performs and DJs in Liverpool today.

Ged Lynn formed The Living Brain, who recorded two albums (Life Sentence On Planet Earth and Bad Present Day) before disbanding. Ged was also a member of Kung Fu with ex-everybody Barry Sutton (who impersonated Ged for a month in ’91). Lynn then formed Rhombus of Doom with Lee Webster in 2000 and later The Privileged Few.

Paul Maguire formed Gloss with Icelandic singer Heidrun Anna Bjornsdottir, who were signed to Nude Records and were active between 2001 and 2002. He has also done session work with former Cast frontman John Power and Candie Payne before relocating to Iceland, where he is now a member of Ske.

Austin Murphy joined the band on live duties in 2015 and has been a fixture since, augmenting the band’s sound keys, harmonica, horns and percussion, as the situations demands. Ozzy is a revered multi-instrumentalist round these parts, who knows Edgar well having been part of The Joneses during the 00s. More recently Ozzy has found critical acclaim with his new outfit The Fernweh – and was last seen on the Future Yard stage providing pitch perfect flute and sax backing for Johnny Echols and The Love Band.

The group returned briefly to the live arena in 2015, headlining at The Kazimier, before performing a memorable set at Liverpool Psych Fest in 2016. The group then played a show at Liverpool’s O2 Academy in 2018, but haven’t played live in Liverpool since then, so this marks a very special return for one of the region’s best loved bands.